A day with John from Chaotic Creations

We decided to create a Artist spotlight blog today and will be kicking off by spending the day with John Lovell from Chaotic Creations in Michigan. John is one of those Guys in the business that are in the business for all the right reasons. Read on further to learn how John went  from slinging make up in his Parents basement to owning one of  Michigan’s largest FX company’s.

It was never easy for me. I was born a poor black child. I remember the days, sittin’ on the porch with my family, singin’ and dancin’ down in Mississippi. Wait never mind that was my opening line to my bio not Johns, lets try this again…..    In the Beginning, Some people can say born and raised where ever..I lived in new york, north Carolina, west Virgina, Pennsylvania, Indiana, las Vegas and finally ended up in Michigan fro the past 26yrs.

I was a model for kids cloths.. I quit because I was in daily fights at school. which turned into an employment scenario of it’s own..but that’s a story I won’t tell, although it has a bit to do with learning how to use makeup to conceal injuries. My mother sold avon and mary kay cosmetics which I acquired, to cover up how I was spending my time.  Now fast forward to 1996, I  Got my first gig as a makeup consultant at the local halloween shop. 1996 was my 5 jobs in one year.. I delivered pizzas, work at the halloween shop, painted apartments on the weekend, made masks in the basement and was a personal assistant to the handicapped. worked for 2 yrs at a dental lab left for a management job in fast food went to college, went to vegas did set building, returned to dental labs for 5 yrs, quit to run chaotic creations full time, then worked in medical for 3 yrs and here we go, back to chaotic creations yet again.

It always came back to Chaotic Creations.

In order to move forward lets take a step back and see how it always came back to Chaotic Creations. When I moved to Michigan in 1988, I spent a lot of time bored so I started to rent a lot of movies. I got quickly addicted to the full moon entertainment franchise films. They created something that was not being done at the time which was behind the scene special effect reels. I could not wait to get my hand on the next one. I practiced the makeup with what ever I had around.  My mother happen to be a cosmetic consultant for both May kay and Avon. There was no internet at the time, information on special effects was almost impossible to find. I continued to grab anything with behind the scenes footage I could find. I continue to learn and grow my craft. Soon I became known as one of those people that always has the best costume in town. People started showing up and asking if I would help them with their costumes and makeups…well it started to grow. Halloween 1995 I had 10 people in my parents basement studio all wanting their make up done, on the same night. I was at my wits end and I needed a solution fast. I was reading through the old fangoria magazines and I found an add for monster makers a business to supply and educate people like me. Still no internet really at this time, I sent my $5 off for the best investment of my life..My monster makers catalog. Arnold goldman had put together complete kits of everything you need to make a mask. I also acquired MBP video set and so it begins. The following year I had six mask designs for those last minute people wanting costumes to chose from. With My local reputation and my knowledge of makeup and materials at the time I was a shoe in for a job at the local Halloween shop owned by Paul Friday. Lots of fun but I had other jobs at the time that paid much more money and I really didn’t see where it was profitable to me..However what I did see was I was making $2000 individual sales on really crappy products. In fact I was amazed at what people were paying for these low end products. I was certain I could make better items. I used my painting jobs to fund Rival FX.. my companies original name. I bought materials and made stuff, I attempted to sell out of my parents garage but unfortunately I realized you have to have a real store to be taken seriously. Realizing I was spending more then I was making and was not in a position to open a real store I backed off and maintained it as a hobby. I settled on a job as a dental technician which allowed me to cast and mold and replicate stuff, it was a good compromise and I took to it very well. Unfortunately the pay was barely above minimum wage and I left for a job as a manager that paid twice as much. I hated that job..i realized at that point if I wanted to make more money I needed to go to college. I struggle for a while between college and work, left for vegas for a few months to do set building went back to the dental lab in 2000. I was married in 2004 and out of work in 2006. My wife and I decided I would open a real studio and I did. 2007 The new chaotic creations FX studios was born located in Stevensville Michigan.. I exhibited at the Niles Haunted House in 2010 where I was approached with an offer to work for the medical industry. Being that the business was new and just beginning to grow, I was lured in by the offer. I worked for the medical industry from 2010-2013 Creating cadaver alternative training models to train surgeons on new procedures. The job was great, it was right up my alley unfortunately I am no longer there. So here I am back In force, ready to focus my energies on my own company. Chaotic Creations FX studios. 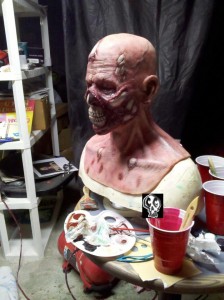 Where did you get the name Chaotic Creations?

Where does the name Johnny Chaos and Chaotic Creations come from?  My first shop was in my parents basement as a teenager. My mother would always complain about the totally chaotic mess that was down there when i was working. One day my mother was warning my father not to go down there “little Johnny Chaos is at it again, he has the whole basement blown up.” In honor of my mother loving words I took it and ran. I was Johnny Chaos and these were my Chaotic Creations and have been ever since. Sounds much cooler til you hear my mother say it LOL

Thank you John Lovell, from Chaotic Creations for telling us the story behind the legend. You certainly have come along way from the Avon Cover up FX of your youth.  Be sure to visit John at the Midwest Haunters Convention at Booth 116, or if you are in the area be sure to stop by his shop at  4150 N Roosevelt rd. , Stevensville, MI.