In the past week there have been 2 drug fueled zombie attacks in 2 days, You may say there is no such things as Zombies but the friends of a man named Michael Daniels of Houston Texas would beg to differ. Apparently on June 22, 2013  Michael Daniels who according to his friends was HIGH on synthetic pot and turned wild and crazy, ( not like Steve Martin, who is a wild and crazy guy also) Michael stripped off all of his clothes and began running around the house on all fours, growling and screaming like a animal.  When Michael ran into the back yard, his friends locked the back door hoping to keep him outside until authorities could arrive, Micheal then screamed and crashed through the glass window of the door  entering the home once more. Michael was injured badly and suffered severe lacerations to his chest and legs which were bleeding profusely, witnesses state that Michael then began grabbing at his blood and scooping it into his mouth to eat.  A friends pet dog entered the kitchen and began barking at Michael, he then beat the dog to death and ripped the beloved pet apart with his own hands and started eating the terrier, hair and all, By the time law enforcement arrived Michael had consumed nearly the entire dog. 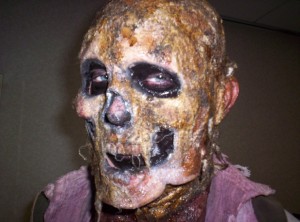 Much like the Don’t Taze me Bro’ fellow from a few years back, Michael Daniels ( no relation to Michigan native Jeff Daniels) Michael was subdued after being Tazered multiple times, Police and Paramedics finally were able to strap Michael down and transport him to a local Mental hospital. The Police spokesperson had this to say, Don’t smoke synthetic pot, its driving people over the edge.

And thats NOT all!

And thats not all folks, thats right if you act right now, I’ll tell you the story about a second person in Texas that killed and partially consumed her 18 month old little boy. What the hell is wrong with people? you might think that after the past few years of K2 and other synthetic drugs turning people into raging lunatics with Zombie like actions that they would steer clear of it but apparently not these guys. On June 23, 2013 Houston police were called to a grisly scene and found Otty Sanchez, sitting on a couch with her throat slashed and severe cuts to her arms and legs. Otty Informed Law enforcement that she had killed and had eaten her eighteen month old son. Authorities confirmed this after a quick search of her home.  Otty was  taken into custody and transferred to the same mental Hospital as Michael Daniels the day before, ( Got to tell you I wouldnt want to be working on their ward)

Life Imitates Hollywood, Zombie are real, the sky is falling,  and vampires sparkle get over it……… and watch out for those womens Bathrooms, you just never know……